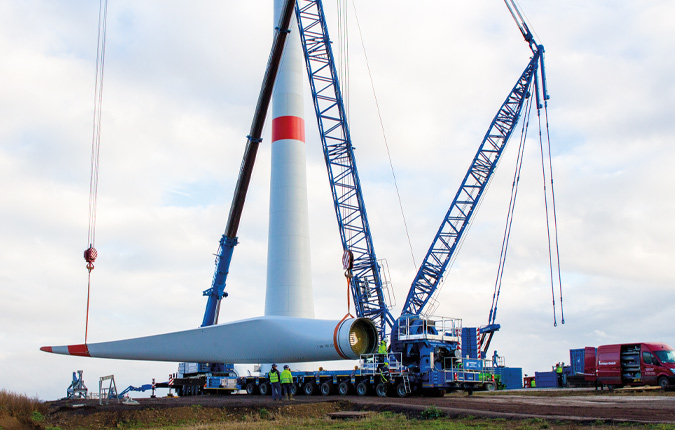 The photo shows the assembly of an almost 60 metre long rotor blade at the Imsweiler site in the Donnersberg district of Rhineland-Palatinate. ABO Wind connected three Nordex N117 turbines to the grid there in January 2019.

(Wiesbaden, 12 June 2019) ABO Wind feels compelled to reduce its profit forecast for 2019. In the recently published annual report, the Managing Board had expressed the expectation that in 2019 the net profit of 12.7 million euros achieved in 2018 would be exceeded. "Now that we have updated our business plan as scheduled after the preparation of the annual financial statements, we expect a net profit of around 10 million euros for the current year," says Managing Director Dr. Jochen Ahn. In particular, further delays in approval procedures for German wind power projects had a negative impact.

This is an industry-wide problem. As the German Wind Energy Association recently reported in a press release, approval procedures for wind farms in Germany currently take an average of 700 to 800 days. Three years ago it was just 300 days. "According to our updated planning, these delays will have a greater impact on the 2019 financial year than we had previously expected," explains Dr. Jochen Ahn. "The good news is that these are essentially postponements, so we are confident that we will actually be able to build the majority of the planned wind farms – just later.”

Due to the blatant lack of approvals for new wind farms, Germany impends to miss the targets for the expansion of renewable energies and for climate protection by a wide margin. The pressure on politicians to act is correspondingly high, so that Dr. Ahn expects better conditions for the German wind market in the medium term.

ABO Wind continues to be successful internationally. Since project development is inherently a time consuming business, the expansion of planning activities is initially accompanied by rising costs. ABO Wind has significantly increased its involvement in Spain, among other countries. This is reflected, for example, in high expenses for guaranties in 2019. "We are confident that this commitment will pay-off in the coming years," says Dr. Ahn. He therefore explicitly adheres to the positive outlook for the years from 2020 and also to the recently expressed expectation that annual surpluses of more than 20 million euros will be the rule at ABO Wind from 2023.