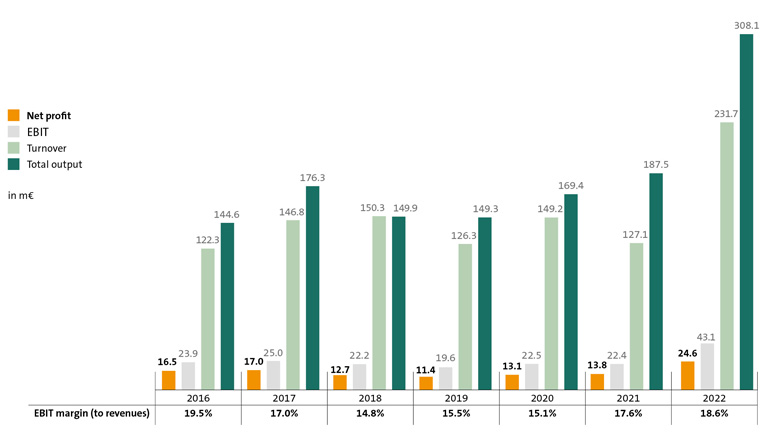 In 2016 and 2017, a multitude of favourable circumstances in several countries resulted in outstanding annual results. Taking this special effect into account, a relatively steady growth of business and result can be seen. The Managing Board expects to regularly achieve net profits of at least 20 million euros from 2024 onwards. In addition to turnover, the position “total output” includes change in inventories. In recent years, ABO Wind has continuously expanded its pipeline of projects under development.

*On the occasion of the 20th company birthday, an additional special dividend of 0.20 euros has been distributed in the anniversary year 2016.

Unlike the regulated market, investors in over-the-counter trading are not legally obligated to report when their voting rights cross a certain threshold. Only if another company owns more than 25 percent of the shares, it has to inform the company. Thus ABO Wind does not have a secured overview of their shareholders or the number of shares they hold.

Dr. Karsten von Blumenthal, Analyst at First Berlin Equity Research, has published several ratings of the share since April 2017. You will find the latest publications here:

Guido Hoymann from Metzler Bank has been analysing the share since September 2019.