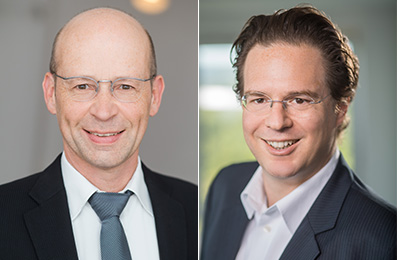 (Wiesbaden, August 9, 2018) Today the Supervisory Board has decided to expand the ABO Wind Management Board to include Dr Karsten Schlageter as its fourth member, effective October 1, 2018. At the same time, the ABO Wind Managing Board will have a chairman for the first time. Andreas Höllinger will assume this role. "Both executives have played a major role in the internationalization of our company, which has been progressing for years," said Jörg Lukowsky, Chairman of the Supervisory Board. "The Supervisory Board is pleased that Andreas Höllinger and Dr Karsten Schlageter will assume even more responsibility in the future."

Andreas Höllinger has held an executive position at ABO Wind since 2001 and was appointed to the Managing Board in September 2010. Before joining ABO Wind, he worked for another developer and operator of renewable energy projects. Prior to that, he was responsible for eco-friendly products at a mutual fund company. In recent years, the 51-year-old executive has been responsible particularly for ABO Wind's successful engagement in France, Finland and Argentina and was in charge of commercial project development worldwide.

Dr Karsten Schlageter has been in charge of ABO Wind‘s international business development as a General Manager for five years. Under the direction of the 44-year-old industrial engineer, the company has begun developing wind and solar projects in new countries such as Canada, South Africa, Greece and Iran and has established subsidiaries and offices. He is also responsible for several project sales in Spain. Before joining ABO Wind in 2013, Dr Schlageter established EnBW's renewable energy business in Peru. Prior to that, he worked in management consultancies.

The Supervisory Board also concluded new long-term Management Board contracts with Matthias Bockholt and Dr Jochen Ahn today. As board members, founders and principal owners, both have a decisive influence on the development of ABO Wind AG. They also initiated the promotion of Andreas Höllinger and Dr Karsten Schlageter. "We are convinced that with our now four-member Managing Board, we are ideally equipped to continue the successful development of the company," said Dr Ahn.