ABO Wind is well on track after first half-year 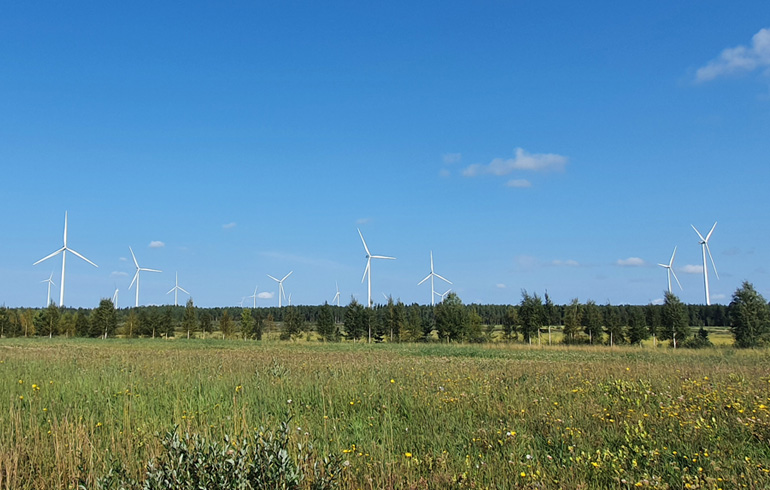 In Välikangas, Finland, ABO Wind is currently connecting the largest wind farm in the company's history to the grid. The 24 Vestas turbines have a total output of 103.2 megawatts.

ABO Wind has reached a new level in the construction of wind farms: In Finland and Spain, the project developer brings projects with a nominal output of more than 100 megawatts to the grid for the first time, 25 years after the company was founded. In Välikangas, Finland, ABO Wind is erecting 24 Vestas 150 turbines, each with an output of 4.3 megawatts. In Cuevas de Velasco, Spain, 19 General Electric 158 turbines with an output of 5.5 megawatts each are under construction. ABO Wind had already sold its two largest projects under construction to the future operators several years ago and then further developed them until they were ready for construction. Now ABO Wind is in charge of the construction as a service provider.

From now on, ABO Wind intends to regularly commission very large energy parks at its own risk. "It is all the more valuable for us to now gain this experience in Finland and Spain," says Managing Director Dr Karsten Schlageter. The project developer is currently working on wind and solar farms as well as battery storage facilities with a total capacity of nearly 16.8 gigawatts globally (see pdf on page 10). "In the past six months, we have succeeded in expanding our pipeline by almost two gigawatts, despite the restrictions imposed by the pandemic," Schlageter emphasises. "This is thanks to the commitment of our 800 colleagues and forms the basis for our future business success." The contact restrictions still in place in many countries impede the initiation of new projects and delay approval processes. Nevertheless, ABO Wind expects further increasing net profits in the next few years.

In the past half year, ABO Wind has made progress in many countries. This includes the first conclusion of a Power Purchase Agreement (PPA) for a 20-megawatt solar project in Colombia and the start of construction of a 20-megawatt wind farm in Poland. ABO Wind has not yet commissioned any projects in either country. "In Greece we are already one step further," says Managing Director Schlageter. "We sold our first two Greek solar projects with a combined 45 megawatts on a turnkey basis after commissioning at the beginning of 2021 and have since already started building the next projects." In Margariti in north-western Greece, ABO Wind is now building five solar parks, each with a capacity of 10 megawatts, as well as a joint substation. Commissioning is scheduled for 2022.

The developer is also making progress in its particularly important home market of Germany. South of Berlin, ABO Wind is currently constructing the "Dreieck Spreeau" wind farm with eight Vestas V150 turbines. This means that the 2016 "Uckley" project is now growing into a wind field of 18 wind turbines with a total output of 66.4 megawatts. Close to the site of the Tesla factory in Grünheide, this is the largest domestic ABO Wind project to date. When selecting the location for a new factory, one factor for Tesla had been that as much renewable electricity as possible would be generated in the region. This underlines the importance of renewable power generation for economic strength.

As in the previous year, ABO Wind also won tariffs in 2021 for three photovoltaic plants supplemented with battery storage units in innovation tenders organised by the Federal Network Agency. Construction of the first ABO Wind hybrid project will begin this autumn in Wahlheim, Rhineland-Palatinate. "With battery storage systems, we have already significantly widened our range as a project developer," says Schlageter. "In addition, we are working on combining renewable energies with the production of hydrogen in Germany and other countries." Green hydrogen is expected to play a significant role in the global decarbonisation of industry and logistics in the future.

The urgency of a radical reduction of CO2 emissions is becoming increasingly clear. In 2021, the effects of the climate crisis have manifested on an unprecedented scale in Germany and other countries. Extreme weather conditions triggered floods, landslides, droughts and forest fires in many places, costing many lives.

The current report of the IPCC has also been a wake-up call and will accelerate the dynamics of restructuring global energy supplies. "An even greater expansion of wind and solar energy is an indispensable part of any climate protection strategy," says Schlageter. Thus he expects conditions for ABO Wind's core business to continue to improve. In Germany, for example, the expansion of wind energy currently lags far behind what is required for effective climate protection. The designation of sites must be increased, obstacles to approval must be removed and procedures accelerated. Recent disasters in Rhineland-Palatinate and North Rhine-Westphalia have made clear to many politicians that consistent action is now required. Managing Director Schlageter: "Climate protection is rightly a central issue in the federal election campaign. We expect politicians to make good on their promises."