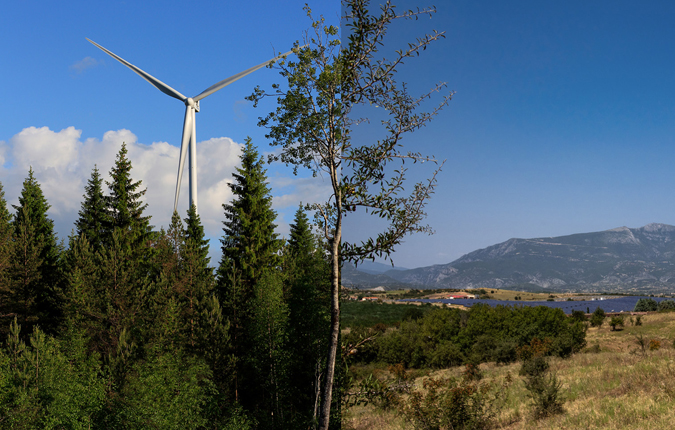 (Wiesbaden, 15 March 2021) ABO Wind has been successfully planning and constructing wind farms for 25 years now. Today, the project developer of renewable energy plants published its annual report for 2020. With 13.1 million euros (previous year: 11.4), the company reported a net profit exceeding ten million euros for the fifth time in a row.

The continuity, which is remarkable for a project developer, is also based on an innovative spirit: about five years ago, ABO Wind expanded its core business to include solar technology and doubled the number of countries in which the current 730 employees are planning renewable energy plants to now 16. The annual report shows that this strategy is bearing fruit. In the financial year 2020, for the first time, the largest single project implemented in terms of electrical output was not a wind farm but a solar park. The photovoltaic modules with a total output of 38 megawatts are now producing clean electricity in Megala Kalyvia, Greece.

ABO Wind has further diversified in terms of technology as well as markets. The basis of the economic success was more international in 2020 than in any previous financial year: eleven countries contributed at least 200,000 euros each to the group's revenue of 149.2 million euros (previous year: 126.3). In 2018, seven countries contributed, in 2019 eight countries. In addition to the German market, whose share fell to 35 per cent in 2020 (previous year: 42 per cent), France (24 per cent), Greece (15 per cent), Spain (nine per cent), Ireland (eight per cent), Finland (four per cent), Hungary (three per cent) as well as Poland, Argentina, United Kingdom and Tunisia (each one per cent or less) contributed to the group's revenue.

"The prospects for the next financial years are also very good," says Managing Board member Matthias Bockholt. The portfolio of projects in the development and construction phase, which has continued to grow, gives particular cause for optimism. ABO Wind is currently working on new wind and solar parks in 16 countries on four continents, as well as on a smaller scale on storage projects with a total capacity of around 15 gigawatts. Details on the development portfolio are available on slide 10 of the investors' presentation.

Among other things, it is worth noting that projects with a capacity of 600 megawatts are currently in the construction phase. Commissioning is expected this year and in the coming year. Among them are the first wind farms with a three-digit megawatt capacity that ABO Wind will connect to the grid. These are the Spanish wind farm Cuevas de Velasco and the Finnish wind farm Välikangas (100 megawatts each). ABO Wind has already sold the project rights for both projects in previous years. Now the project developer is also taking care of the construction as an EPC service provider and is involved in the further progress of the project through milestone payments.

In recent years, Finland and Spain have become increasingly important for ABO Wind. In Finland, the company is even one of the market leaders. "It is a logical step for us to connect the first very large projects to the grid there," says Bockholt. "Both countries have large sites that are excellently suited for regenerative electricity generation. There are many good reasons for us to build more very large wind farms in Finland and solar farms of this scale in Spain in the coming years. With the current projects under construction, we are gaining important experience."

Through retained earnings and the issue of new shares, ABO Wind increased its equity in 2020 by almost 40 million euros to about 140 million euros. "This is a good basis for implementing such large-scale turnkey projects in the future, even at our own risk and with our own funds," says Bockholt. "Nevertheless, we will continue to sell the rights of individual projects in the development phase from our large portfolio, if the situation is favourable for this." ABO Wind is further significantly strengthening its financial basis by issuing a corporate bond, which is exclusively distributed by GLS-Bank. In view of the very good demand, ABO Wind expects issue proceeds of around 50 million euros in the course of this year.

In addition to the financial basis, ABO Wind has also expanded its business: besides wind and solar, battery storage is on its way to becoming the third technological pillar in the core business of project development and construction. In 2020, ABO Wind already implemented a small battery project (0.2 megawatts) for the waste disposal company Abfallentsorgung Kassel and a much larger battery project with a capacity of 50 megawatts is currently in the implementation phase in Kells, Northern Ireland, and is scheduled to be connected to the grid in 2022. Three so-called hybrid projects with a combined capacity of 10 megawatts are also being implemented in Germany. They use both solar and battery technology and have secured tariffs in last year's innovation tender by the German Federal Network Agency.

"In terms of content as well as financially, we have created very good conditions for further successful business years," summarises Managing Board member Bockholt. The shareholders should also benefit from the success of the most recent business year. The Managing Board and the Supervisory Board therefore propose to the Annual General Meeting to increase the dividend from 0.42 euros in the previous year to 0.45 euros. Due to the Corona pandemic, the Annual General Meeting will be held virtually on 23 April. The agenda is available in German on the company's website.

ABO Wind is currently building three GE 5.3-158 wind turbines in Einöllen, Germany to be commissioned in the spring of 2021.