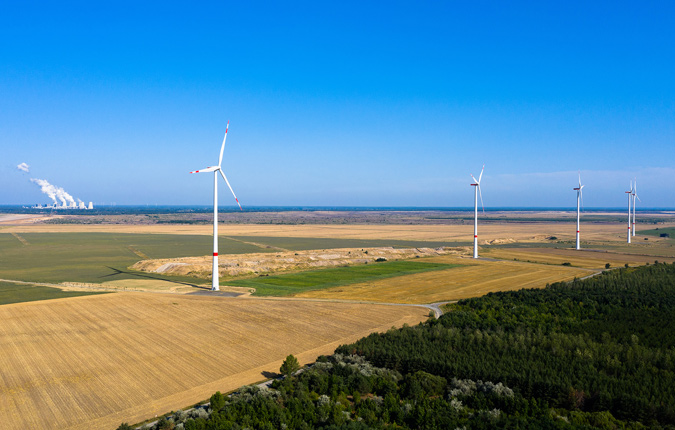 (Wiesbaden, 30 September 2019) With a successful first half of 2019, ABO Wind has further improved the future prospects of the company. The company has secured a large number of sites and has already started developing new projects on them. 3,500 megawatts have reached project status in the first half of 2019. This development has continued in the third quarter.

“In light of the wind energy crisis in Germany, that would be a very respectable result,” says Managing Director Andreas Höllinger. Unfortunately, according to Höllinger, the grand coalition has only paid lip service to climate protection and the expansion of renewable energies and has yet to come up with concrete policies. The draft laws presented as the "Climate Package" do not seem to be suitable to give momentum to the limping expansion of wind energy. However, this is necessary to ensure that Germany does not permanently fail to meet its climate protection obligations. Höllinger therefore expects that the government in whatever coalition will sooner or later approve the necessary reforms. He stresses that ABO Wind is prepared to realise significantly more projects in Germany than is possible under the current conditions.

Despite the problems in Germany waiting to be solved, ABO Wind remains robust. Internationally, the company has significantly expanded its activities and is working in 16 countries on future wind and solar parks with a capacity of approximately ten gigawatts. Together, South Africa and Argentina account for more than three gigawatts. Due to the available land, the projects in these countries are usually much larger than in Central Europe. New projects in Finland, Colombia and Tunisia also contributed to the expansion of new business. ABO Wind is currently working on projects with an output of around one gigawatt in Germany, France and Finland, the most important countries for the current income situation, and on projects with an output of around 500 megawatts in Spain.

Due to the higher risks and lower realisation probabilities as well as the lower margins, ABO Wind makes discounts in its management reporting for projects outside Europe. The management report therefore speaks of a risk-adjusted project pipeline of 7,500 megawatts - 5,000 megawatts of wind energy and 2,500 megawatts of solar energy. The half-year report is available on the company's website at: https://www.abo-wind.com/en/the-company/about-abo-wind/annual-reports.html

Just as positive as the expansion of the portfolio of projects under development is the sale of projects in various phases. In Finland, Spain and France, ABO Wind sold 317 megawatts of wind and solar projects under development in the first half of the year. This generated considerable income, at the same time, the company participates in the further project progress and is in most cases also entrusted with operational management after commissioning.

It can also be considered a success that ABO Wind obtained tariffs for three smaller solar projects, each with 10 megawatts, for its first participation in tenders in Argentina. "The difficult economic and political conditions in Argentina complicate the realisation of these projects," says Höllinger. After having already sold several hundred megawatts of wind farms ready for construction in Argentina in previous years, ABO Wind is nevertheless aiming to connect projects to the grid itself. "This also serves to further improve our market position in Argentina, which is already good. However, we take care to keep the economic risks manageable," assures Höllinger. He therefore sees good opportunities to build the three solar projects next year in cooperation with partners.

In Greece and Hungary ABO Wind connected solar parks with six and seven megawatts respectively to the grid in 2019 and is working on the construction of further solar parks in both countries with a total capacity of around 45 megawatts, which are expected to be commissioned in 2020. "Overall, we are in a good position to make a contribution to the development of renewable energies in these 16 countries over the next few years," says Höllinger. In the medium term, i.e. in around five years, he therefore expects an annual net profit of more than 20 million euros.