ABO Wind Ireland Ltd were granted planning permission for 8 wind turbines up to 150m in height and associated infrastructure on Coillte land at Sheskin forest, Bellacorick in December 2016.

It is important to us that communities surrounding the site are kept informed about developments in the project, and given the opportunity to give feedback prior to us making a planning application, so that any suggestions and concerns can be taken on board.

On 12 June 2019, we lodged a planning application to Mayo County Council for amendments to the existing planning permission.

These amendments include the following:

Members of the public have until 16 July to make submissions to Mayo County Council.

We are now intending to apply to amend the planning permission to allow for an increase in the height of the turbines. Turbines 1-3 would increase from 150m to 176m and turbines 4-8 would increase from 150m to 165m. This design approach takes into account the nature and elevation of the site and aims to ensure that there is no noticeable difference in the appearance of the revised scheme, compared with the original. Almost all elements of the consented scheme such as turbine locations and access track layout remain unchanged, with the exception of a slight increase in foundation size.

Rationale for the changes

There have been significant advancements in turbine technology over recent years and there are now a range of larger wind turbines available on the market. The rationale for the increase in turbine dimensions is to increase electricity production from Sheskin wind farm by using larger wind turbines with higher tip heights which can extract more energy from the wind. This will increase the estimated annual production of the project from 77,000 GWh to 100,000 GWh, resulting in an increase in carbon savings from 49,264 tonnes to 64,025 tonnes per annum, and meeting the electricity needs of approximately 23,600 homes, an increase of 5,500 compared with the consented scheme. 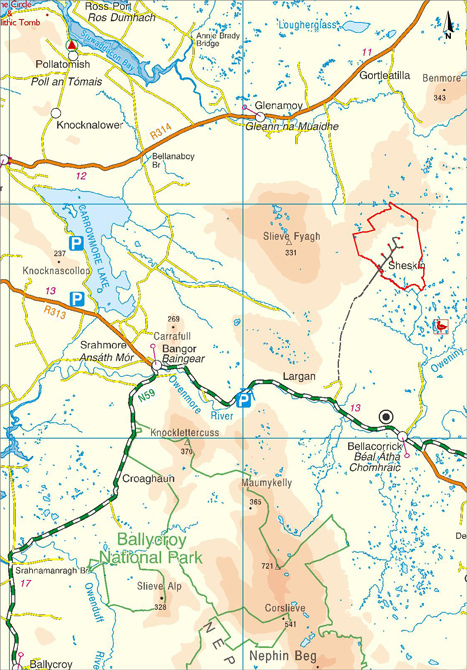 Sheskin Wind Farm site is located in the townland of Sheskin circa 8 km north of the settlement of Bellacorick. It lies immediately to the east of Slieve Fyagh Mountain (331 m) at the northern extent of the Nephin Beg Range. The village of Glenamoy and town of Bangor Erris are circa 8km to the northeast and circa 12 km to the south west respectively.

General access to the site will be via the N59 national secondary route and L52926 local road which connects with an existing forest road that extends to the site entrance. The N59 circles around the west of Ireland, starting in County Sligo and passing west into County Mayo through Ballina and proceeding indirectly to Westport and south east to Galway City.

The site area covers approximately 688 ha, and overall falls on a gentle gradient from north west to south east. The site is entirely owned by Coillte Teoranta and was planted mostly in the 1980’s with coniferous forest of predominantly Lodgepole Pines and Sitka Spruce.

Prior to commercial operation ABO Wind will set up a community benefit fund with a contribution of €2/MWh of electricity produced, in line with the Renewable Energy Support Scheme terms & Conditions. This will benefit communities living closest to the wind farm. This fund can be tailored to meet the needs of the local community and we are happy to take on board any ideas or suggestions relating to the fund.

A national community benefits register will be established for all RESS projects and a Good Practice Handbook published by the Government prior to July 2021. More details to follow.

Photomontage – view of Sheskin turbines from Western way at Tawnaghmore

Photomontage – view of Sheskin turbines from local road at Srahmeen

As the proposal includes sections of Coillte's Sheskin property, please do not hesitate to e-mail lsinfo@coillte.ie with any Coillte related enquiries.