Castlewaller wind farm was granted consent for 16 wind turbines up to 145 m in height and associated infrastructure near Newport, County Tipperary, in April 2012.

Unfortunately we haven't received our formal grid connection offer from Eirgrid as yet. Until we receive this, we cannot finalise our planning documents and drawings. As such, it is likely that the planning application submission will be delayed until early in the new year. We will keep the website updated once we have a clear timetable.

A planning application for the underground grid connection to connect the wind farm to the electricity network at the 220/110 kV Killonan substation in Co. Limerick will be made to An Bord Pleanala in late 2019.

The grid route is shown below. 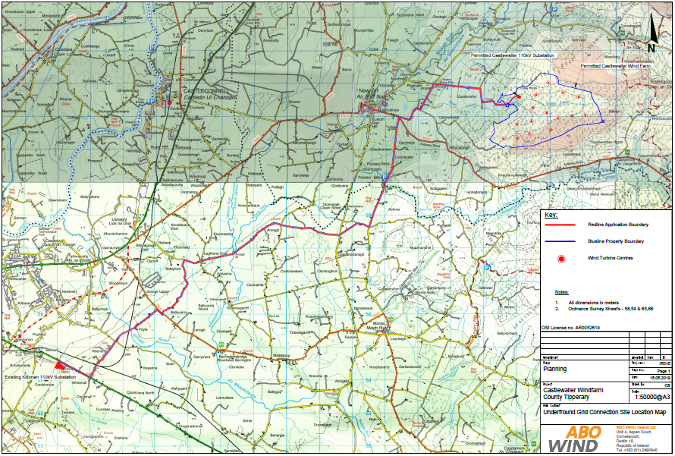 February 2019: Current timetable for the project

A temporary 80m meteorological mast will be installed in March 2019 in order to obtain updated wind data for the site.

Wind farm construction is scheduled to commence in 2021, subject to all consents/agreements being in place.

In line with the Renewable Electricity Support Scheme (RESS) high level design paper, Castlewaller wind farm will contribute €2/MWh to a community benefit fund. Details of the fund will be discussed with the local community prior to construction of the wind farm.

This new website will keep interested residents informed about the development of our wind farm Castlewaller. Please don’t hesitate to get in touch with us if you have any questions! 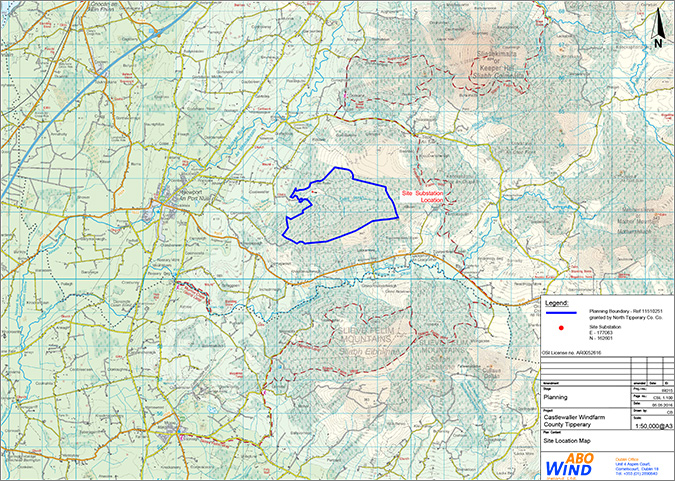 The site is dominated by commercial forestry. The forested Castlewaller property covers 500 ha. It consists mainly of Sitka Spruce planted during the period 1989 – 1994. An area of cutover bog is located to the north of the site with some small patches of bracken and mixed broadleaf woodland to the west. The elevations within the site range from approximately 180 m in the west to 350 m above sea level in the southeast.

The site is located north of the R503 Limerick to Thurles road. From Newport, the site is accessed via a County road running northeast for 3 km, and then east for another 1 km.