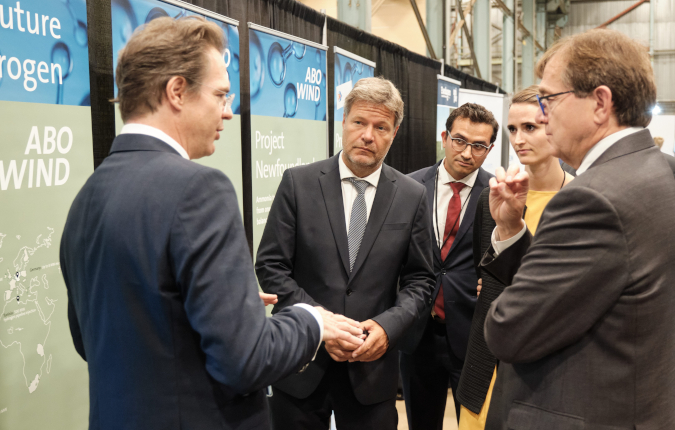 (Stephenville/Wiesbaden, 24 August 2022) On the occasion of signing a German-Canadian hydrogen agreement in Stephenville, Newfoundland, Germany’s Minister for Economic Affairs and Climate Action Robert Habeck and Canada's Minister of Natural Resources Jonathan Wilkinson learned about ABO Wind projects in Canada. Both countries want to end the dependence on fossil resources and fight climate change with hydrogen from renewable energies. ABO Wind is working on the development of several large wind farms in three Atlantic provinces in Canada. The planned wind farms have a capacity of eleven gigawatts. The green electricity could be used to produce up to 900,000 tonnes of hydrogen, convert it into ammonia and ship it to Germany, for example.

At the signing of the agreement in Stephenville, ABO Wind was present with a stand to inform the politicians about the plans. German Chancellor Olaf Scholz and Canadian Prime Minister Justin Trudeau also attended the event. "The future lies in hydrogen," said Scholz. Habeck announced that he would press ahead with "flagship projects." The hydrogen agreement is a “significant milestone as we accelerate the international market roll-out of green hydrogen and clear the way for new transatlantic cooperation. Specifically, we aim to build up a transatlantic supply chain for green hydrogen.”

ABO Wind Managing Director Karsten Schlageter is impressed with the commitment of the politicians and the opportunity to exchange ideas with government representatives. "The agreement and the trip demonstrate how seriously the energy transition is now being driven forward. We look forward to making our contribution with our hydrogen projects in Canada." Worldwide, ABO Wind is currently working on renewable energy projects with a total of 15 gigawatts of capacity in connection with a planned hydrogen production. These development projects run in parallel with a further 20 gigawatts of wind and solar farms in development to feed electricity into grids in the future. "We treat these two development pipelines separately, because building a hydrogen economy is complex," explains Managing Director Schlageter. "Not least the German-Canadian agreement brings a very welcome dynamic to this topic.”

Meanwhile, ABO Wind has taken a big step forward with its hydrogen project in the province of New Brunswick: Immediately before the signing of the government hydrogen agreement, Chief Richardson of Pabineau First Nation and Karsten Schlageter signed a cooperation agreement. Together, the partners, which also include the local Canadian project developer Community Wind, want to push ahead with a four-gigawatt wind energy project that will provide electricity for hydrogen production. "First Nations are critical to successfully implementing projects like this in Canada. We have already worked closely with First Nations on the 500-megawatt Buffalo Plains Wind Farm that has recently reached ready-to-build status," said Schlageter. Chief Richardson, representing the Pabineau First Nation, appreciates ABO Wind as a like-minded partner on the clean energy journey and assured his full support.

Initial information about ABO Wind's large hydrogen projects, located in Canada and Argentina, as well as a medium-sized project in Tunisia and a smaller one in Germany, is available on the company’s website.