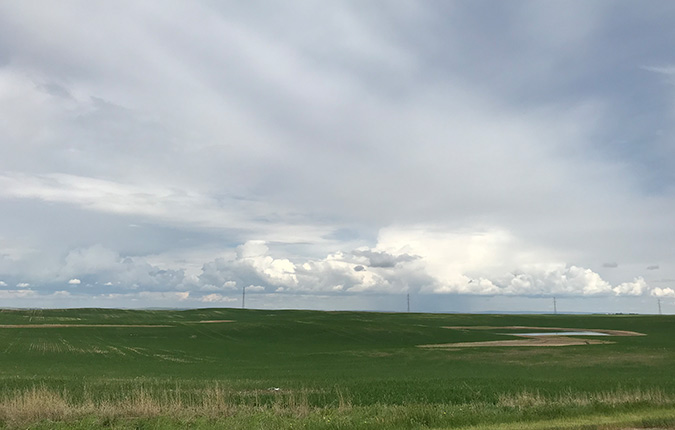 The farmlands where Buffalo Plains wind farm will be built

(Calgary, July 28, 2022) German-based renewable energy developer ABO Wind has sold its Canadian 514.6-megawatts project Buffalo Plains Wind Farm to an investor upon reaching ready-to-build status. The Alberta Utility Commission has granted permits for 83 Siemens Gamesa turbines with a capacity of 6.2 megawatts each and the connection to the public power grid. Both permits have become fully effective. The investor is planning to publish a report about their Canadian activities in late August and chooses to remain anonymous until then.

The wind farm spans approximately 17,500 acres of privately owned farmland in Alberta. The project will generate 1,500 gigawatt hours of electricity per year and is expected to create 300 jobs while under construction as well as up to 15 permanent jobs. The wind farm will displace more than 795,000 tonnes of carbon dioxide a year and provide enough clean energy to power the equivalent of 240,000 Alberta homes.

ABO Wind Director Canada Stefan Groos says: “We are proud of having successfully developed one of Canada’s largest wind farms. We look forward to supporting the investor bring this project to fruition. ABO Wind is working on numerous other promising projects in Alberta, Atlantic Canada and other provinces with a dedicated and growing Canadian based staff in Calgary and Halifax.”

More information about Buffalo Plains Wind Farm can be found on the website www.buffaloplainswindfarm.com.