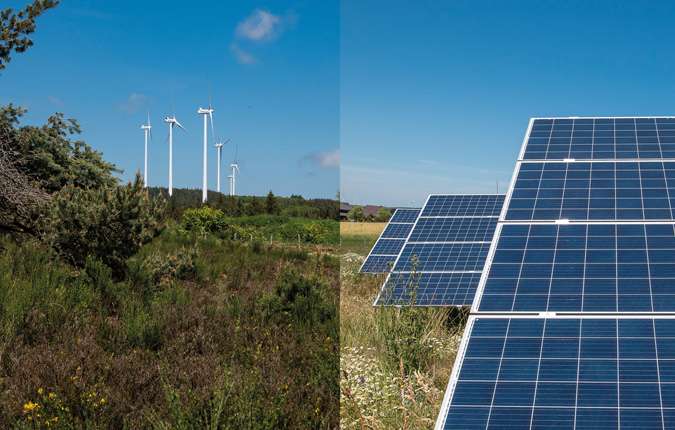 (Wiesbaden, 1 July 2021) ABO Wind has been working on the planning, construction, and operational management of renewable energy plants for 25 years now. Currently, the project developer has more business opportunities than ever before. "We want to push forward the energy transition in many countries," says Managing Director Dr. Jochen Ahn. "That is why we have decided to increase the volume of our corporate bond to 50 million euros. The bond is already being marketed and will enable us to grow further."

Since February, the social-ecological GLS Bank has been the exclusive distributor of the subordinated bond. The security has a term of nine years. The original securities prospectus stipulated a volume of 30 million euros and included the option of an increase. The amount initially envisaged has now been largely subscribed. "We are pleased about the strong interest in participation in the expansion of alternative energy sources," says GLS Executive Director Christina Opitz. "By increasing the bond, we enable our customers to continue to combine climate protection and investment and to be part of the energy transition."

ABO Wind uses the additional financial resources to develop and construct even more wind and solar farms in 16 countries on four continents. In addition, the renewable energy specialist is increasingly involved in battery and hydrogen projects. In Germany, for example, three projects combining photovoltaic plants and battery storage are currently under construction. For these projects, ABO Wind had secured remuneration in the first innovation tender of the German Federal Network Agency in 2020. In the 2021 tender, the project developer prevailed with another project that combines photovoltaics and battery storage. In Kells, Northern Ireland, ABO Wind is currently building a large battery project with a capacity of 50 megawatts. The battery project will, among other things, contribute to stabilising the electricity grid on the Emerald Isle. This is a prerequisite for further increasing the share of wind energy generation in Ireland, which already covers around one third of the Irish electricity generation. Batteries help to balance out the frequency fluctuations caused by the volatile feed-in.

"Project development of wind farms requires stamina and a good financial base," emphasises Dr Jochen Ahn. ABO Wind sometimes invests up to ten years of work until a wind farm is realised. Increasingly complex approval procedures and, in some cases, legal disputes have to be overcome on the long road to commissioning. "Fortunately, in many cases we are successful in the end, which is also reflected in our consistently good business figures." Since its foundation 25 years ago, ABO Wind has continuously reported black figures. Due to many good annual results, the company has built up a strong equity base of around 140 million euros.

In 1996, Dr Jochen Ahn and Matthias Bockholt started as a team of two; today, the founders and Managing Directors have a staff of around 800 colleagues worldwide. The funds from the GLS bond make further growth possible. In Germany, for example, a ruling by the German Constitutional Court has just obliged politicians to take more consistent action against global warming. Thus, there is no way around improving the conditions for the construction of further wind and solar farms. Electricity from renewable energies is key to decarbonising Germany. It is becoming apparent that climate protection will also play a major role during the elections of the German Parliament in September.

ABO Wind is prepared to contribute to an increasing expansion of renewable energies in Germany. The company has already increased the number of project managers in the domestic market by a third since March 2020. On an international level, the company is also hiring new personnel to meet the challenges. More than 70 job offers are currently available on the company's website.

This announcement does not constitute an offer. In particular, it does not constitute a public offer to sell or an offer or invitation to acquire, purchase or subscribe for bonds, shares or other securities. The offer is governed exclusively by the securities prospectus and supplements thereto approved by the Commission de Surveillance du Secteur Financier (“CSSF”) on 28 January 2021. This prospectus and supplements thereto are available for download at www.abo-wind.com/anleihe and www.bourse.lu. The securities prospectus alone contains the information for investors required by law.

Investors are advised to carefully read the Prospectus, which has been reviewed by the CSSF for completeness, consistency and comprehensibility, before deciding to acquire or dispose of bonds of ABO Wind AG in order to fully understand the potential risks and rewards of the investment decision and to make an investment decision only after having consulted with their own lawyers, tax advisors and/or financial advisors and having taken into account all available information about the company. It should be noted that any approval of the Prospectus by the CSSF should not be construed as an endorsement of the securities concerned.

A public offer of the securities mentioned in this announcement will take place exclusively on the basis of and in accordance with the securities prospectus and only in the Federal Republic of Germany and the Grand Duchy of Luxembourg. In particular, neither a public offer nor an invitation to submit an offer to purchase securities is taking place in the United States of America, Japan, Canada, New Zealand or Australia.