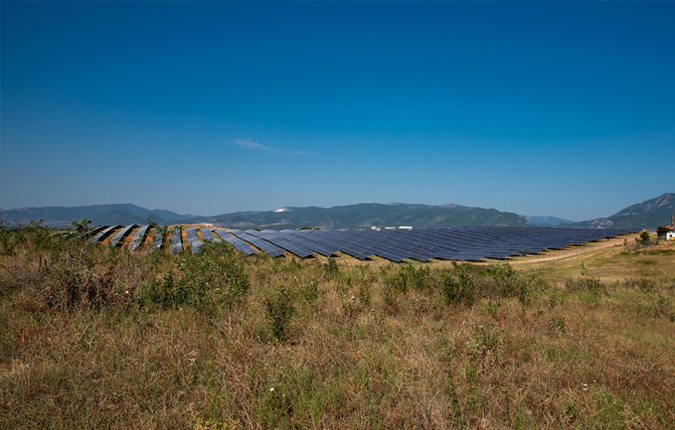 In 2019, ABO Wind installed the company's largest photovoltaic system to date with a capacity of 7 megawatts in Kossos (north-eastern Greece). A second, even larger Greek solar energy project is currently under construction. Megala Kalyvia solar farm (38 megawatts) will be connected to the grid in the coming weeks.

(Wiesbaden, 9 June 2020) ABO Wind looks back on a successful financial year 2019. According to the annual report published today, the company earned a net profit of EUR 11.4 million. This is the fourth time in a row that the result exceeds the ten million euro mark. The annual report 2019 is available for download on the company's website (https://www.abo-wind.com/en/the-company/about-abo-wind/annual-reports.html).

In Germany, France, Ireland, Greece and Hungary, the company has installed wind or solar farms with a total capacity of 88 megawatts in 2019. In addition to the sale of turnkey renewable energy plants, the sale of project rights in the development phase also contributed to the company's success. In 2019, such sales with a volume of 870 megawatts were realised in Spain and Finland. The majority of the expected income from these sales will be received as development and construction progresses in the coming months and years.

Contribution of German business has decreased

The 2019 sales revenues of EUR 126 million reported in the balance sheet were generated in ten countries – the highest number in the company’s 24-year history. The percentage of business in Germany has further decreased to around 42 percent and thus remained below the 50 percent mark for the third time. Between 2013 and 2016, Germany's contribution to the consolidated sales revenues fluctuated between 60 and 75 percent.

"Germany remains our most important market," says Chairman of the Managing Board Andreas Höllinger. "But growth in recent years has been on an international level." Thus, it was possible to reduce the previously high dependency on the German market. This strategy is paying off: German projects continue to be profitable, but the number of approvals for new wind energy projects has fallen significantly between 2017 and 2019. Whereas in 2017, onshore wind farms with a capacity of around 5,000 megawatts were installed in Germany, this figure fell to 1,000 megawatts in 2019.

This development has been fatal for the clean energy transition in Germany, and it has forced turbine manufacturers to lay off workers on a grand scale. Nevertheless, ABO Wind was able to compensate the downturn in Germany. Thus, the number of employees has continued to grow despite the lack of approvals. The ABO Wind group currently employs 642 employees, one hundred more than in the previous year.

446 of them work at the nine German office locations – the majority at the Wiesbaden headquarters and in Heidesheim near Mainz. "Most of our colleagues in Germany are working on wind and solar projects in all 16 countries we operate in," explains Höllinger. Employees in the respective countries are mainly in charge of project development. Among other things, they conclude lease agreements with landowners, commission impact assessments, and submit documents to the approval authorities. Central services such as grid connection, financing, yield calculation or the purchase of the turbines are mainly provided from Germany to the projects worldwide.

Delays due to the pandemic

Although in recent months, the COVID-19 pandemic has made it difficult to secure new sites for the development of wind and solar projects in many countries, ABO Wind has succeeded in further increasing the volume of wind and solar farms under development from mid-2019 to the present day. ABO Wind is now working on projects with a total rated output of around twelve gigawatts. In terms of the planned megawatt output of the projects, around one third of the development portfolio is located in Argentina, Colombia, Tanzania and South Africa. In terms of the development costs capitalised in the balance sheet, these countries have less weight, totalling around five percent. In the past, ABO Wind has already proven in Argentina, for example, that it is possible to successfully develop renewable energy projects even in comparatively unstable markets.

International diversification reduces the company's dependence on fluctuations in individual markets. ABO Wind is currently also benefiting from the resurgence of renewable energies in Spain. In the course of an economic crisis, the expansion of wind and solar farms in Spain came to a practical standstill between 2012 and 2017. Thereafter, a recovery set in. In 2019, Spain was number one in Europe in both wind and solar installation. ABO Wind took advantage of the boom and sold some of its projects in an advanced development stage, which the company had continued to promote even in times of crisis. In 2019, ABO Wind installed for the first time solar systems in Hungary and Greece, and sold them in 2020.

"We are currently working on numerous projects in 16 countries on four continents, which puts us in a great position for many more successful financial years," says Höllinger. The COVID-19 pandemic is affecting authorities, courts and suppliers, and it is likely to delay many projects. This makes it difficult to make a forecast for the current financial year. However, the Managing Board does not foresee any substantial problems. For the 2020 financial year, the Board expects – depending on the further course of the pandemic – at least as good a result as in 2019. A significant increase might even be possible in the current year.