1,000 megawatts of German wind energy connected to the grid 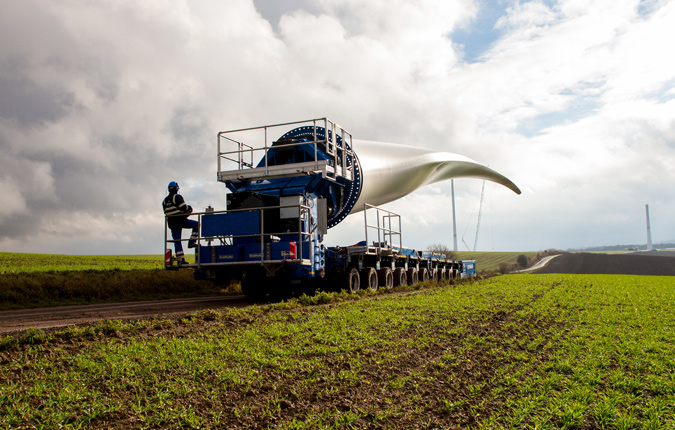 A self-propelled modular transporter takes a rotor blade to the construction site of our wind farm Imsweiler, Germany. ABO Wind has connected three Nordex N117 turbines to the grid in January and thus has reached the milestone of 1,000 megawatts in Germany.

(Wiesbaden, February 7, 2019) With the first two commissioned wind farms in 2019, ABO Wind has reached the milestone of 1,000 megawatts in Germany. The two newest wind farms now produce clean electricity in Rhineland-Palatinate. Since 1996, the project developer has connected 445 wind turbines with 1,002.9 megawatts to the grid in their home market Germany (link to track record). The turbines produce the amount of electricity that approx. 1.7 million German citizens would consume in their homes. "This makes ABO Wind one of the most experienced developers in Germany," says Dr Thomas Treiling. The geographer and former Head of Department was promoted to General Manager a few weeks ago and is now responsible for German project development at ABO Wind.

The company is planning numerous further wind farms in Germany over the next few years. "We are currently working on wind energy projects with a capacity of more than 1,000 megawatts at various stages of development throughout Germany," says Treiling. Numerous solar parks are also in development. Since 2017, ABO Wind has installed several small photovoltaic plants with up to 750 kilowatts each. The company is currently expanding its activities and is looking for suitable sites for larger solar projects in Germany, for example next to motorways and railway lines or on inferior agricultural sites.

With the ongoing phase-out of nuclear energy and coal mining, the demand for sustainable power plants using renewable energies is growing nationwide. By 2030, the German government intends to raise the contribution of renewables to the country’s electricity needs to 65 percent. Currently, the quota is approximately 36 percent. "Competent and experienced project developers like ABO Wind will make a significant contribution to achieving these goals and thus will help advance climate protection," Treiling says. He now urges politicians to take action. "Federal and state governments must create the conditions for more wind farms to be approved."

In the past two years, many projects have failed during the approval process - often due to nature conservation restrictions. According to Treiling, it is necessary to balance out the requirements of species conservation with those of climate protection. Otherwise, a blockade of renewable energies would run counter to both concerns. He also stresses the importance of a working group with members of the two political parties CDU and SPD, which is currently developing suggestions to strengthen the acceptance of wind energy in Germany. "It would be helpful if local communities profited even more financially from wind energy in the future," says Treiling, thus supporting one of the proposals discussed. On the other hand, he strongly advises against aggravating the shortage of sites available for wind energy or making wind power more expensive through turbine height limits.