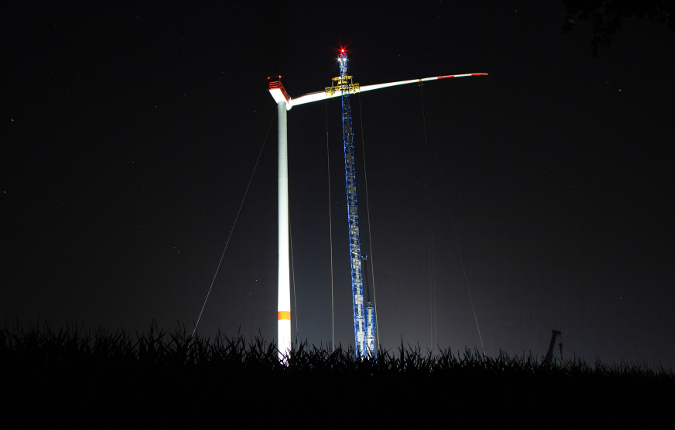 (Wiesbaden, October 1st, 2018) With its half-year report published today, ABO Wind underscores its reputation as a project developer known for its consistency and solidity. The specialist for wind and solar power generated a net profit of around EUR 5.5 million in the first six months of 2018. "We are on track to achieve our forecast for the whole year and thus a result above ten million euros," says Managing Director Dr Jochen Ahn.

According to Dr Ahn, the financial year of 2018 will probably be near the average of the past four financial years. "We are pleased with our consistently successful course of business even at a time characterised by considerable challenges, especially in Germany." The half-year report is available in German on our website along with previous financial statements.

The Managing Board had already expected that the record results of 2016 and 2017 would not be repeated this year and communicated this early on. At EUR 8.8 million, the result of the first half of 2017 was even better than that of the current year. However, ABO Wind has improved regarding other key figures. Particularly noteworthy is the growth of the company’s pipeline of wind and solar projects in development. The developer succeeded in securing new projects with a total output of more than 1,600 megawatts during the first six months of 2018.
In addition to established ABO Wind markets such as Germany, France, Finland and Argentina, new countries such as South Africa, Colombia and Canada also play a major role in new business. Also noteworthy is the fact that solar energy is now just as important for the company as wind energy when it comes to securing sites.

However, the revenues of EUR 56.4 million (first half of 2017: EUR 73.9 million) in the first half of 2018 were still mainly generated by wind power projects in Finland and Germany.

"In addition to the good profit situation, I am happy that we have improved our basis for long-term success at the same time," said Managing Director Dr Ahn.