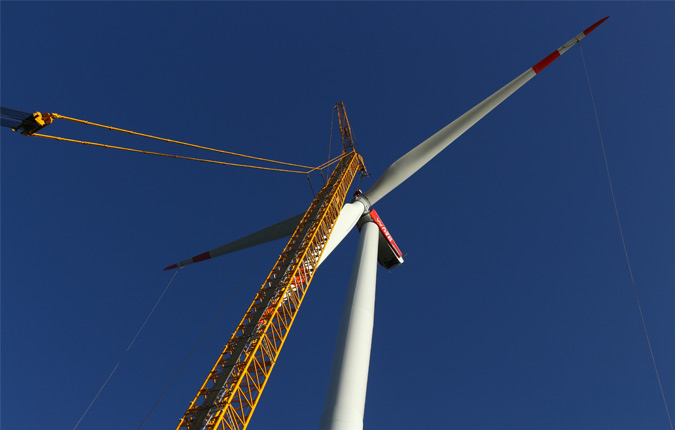 (Wiesbaden, 7. July 2017) ABO Wind continues on the path of international success. About a month ago, the German-based company announced the sale of a portfolio of French wind energy projects amounting to 100 megawatts to the Czech utility ČEZ. Additionally, ABO Wind has sold a UK project with a capacity of 35 megawatts to a utility. The project is ready to build. Together, the sale of rights of the French and UK projects will have a significant positive impact on the company’s 2017 annual result.

Construction of the Irish wind farm Cappawhite B is about to start. It is scheduled to be commissioned next summer, after the installation of a substation needed for the grid connection. The project in the county Tipperary comprises four Vestas 105 turbines with 3.6 megawatts of capacity each. Cappawhite B will be the fourth wind farm installed by ABO Wind in Ireland. The first three projects were commissioned between 2010 and 2013 and have a total nominal output of 70 megawatts.
ABO Wind is confident they will be able to install two more wind farms in the Republic of Ireland in the years 2019 and 2020 respectively.

Revitalization in Spain and Argentina

The revitalization of the Spanish wind market also sends positive signals. ABO Wind expanded to Spain in 2001, but after promising years, the 2008 economic crisis hit the country hard and brought the wind energy sector to a halt. The newly awarded tenders in recent months have increased demand for Spanish wind energy projects. As a result, ABO Wind was recently able to sell the project Motilla (52.5 megawatts) in Castilla-La Mancha. The project is almost ready to build and was sold to a large European utility ABO Wind has worked with in other markets.

In Argentina, ABO wind sold six wind projects with a total capacity of 350 megawatts in 2016. Those projects formed a part of the latest tenders in Argentina. ABO Wind is currently selling additional Argentine projects and has concluded several option agreements with third parties in 2017. These agreements yield a modest profit and improve the prospects of further deals. In addition, ABO Wind now offers technical services such as engineering and construction supervision in Argentina. The demand for these services is increasing and several clients have already signed on ABO Wind.
ABO Wind has built a competent team in Buenos Aires, who can rely on the support of the company’s German-based experts for EPC, civil works, and electrical works.

The promising developments in France, Ireland, Spain and Argentina have prompted the company’s Managing Board to increase the profit forecast for the current financial year. “At the moment, we are expecting a surplus at least as high as last year’s result”, says Managing DirectorDr. Jochen Ahn. In 2016, the company had achieved a surplus of 16.5 million euros.

In addition to the international successes, Germany projects still contribute a large portion to the company’s overall success. By the end of 2017, ABO Wind will have commissioned 100 megawatts in Germany alone in 2017. Despite challenging schedules, all projects are on time, which is important for their economic success due to the degression of the feed-in tariff secured in 2016.

The construction of three Finnish wind farms with a capacity of 60 megawatts is also proceeding according to schedule. “We owe our strong economic position to our excellent employees," emphasizes Dr. Jochen Ahn.