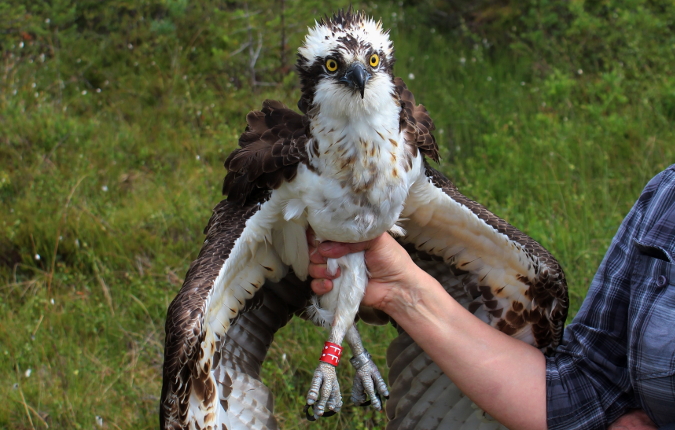 Osprey Joeli while he was equipped with a GPS tracker.

(Wiesbaden, October 28th, 2016) Joeli has arrived in Cameroon. Before that, he spent some time in the area around the Bulgarian coastal town Burgas, had a quick stopover on the Peloponnese and afterwards he crossed Libya. The journey of the osprey called Joeli started on August 30th in the Finnish municipality Hyrynsalmi. Why we know this? Because a wind farm is to be built in Illevaara, a village within the municipality Hyrynsalmi. But let's not get ahead of ourselves.

“While developing a wind farm we consider both the needs of humans and the requirements of nature,” says ABO Wind project manager Karl Schultheis. He is responsible for planning up to eight wind energy turbines in the Finnish Kainuu region, near the Russian boarder. “The wind farm development in Finland is a bit different from Germany,” Schultheis stresses. He knows what he is talking about: His mother is German and his father is Finnish. So he knows both countries very well: “The quality of the wind regime in Finland is similar to Germany. But there is one crucial difference: Finland is much less populated than Germany, especially in the north,” Schultheis explains. The wind farm planned by him is more than two kilometers away from the nearest building. Within four kilometers there are not even a dozen inhabited houses. In Germany distances of less than one kilometer to villages are common.

But there are not only people to consider while planning wind energy turbines in Illevaara. There is also flora and fauna, which brings us back to Joeli. During this summer the osprey inhabited a nest, which is about 500 meters away from the location of the planned wind farm. According to the local administration’s requirements, this is too close to exclude the possibility of collisions between the osprey and potential wind energy turbines. Therefore the migratory bird was caught by employees of the Finnish Osprey Foundation and equipped with a GPS tracker, before he left Finland for his flight to Africa this summer. The campaign was financed by ABO Wind for two reasons. On the one hand, the scientists generate important data to learn more about the routes ospreys fly during the summer. “One the other hand, the GPS tracking allows us to control if our efforts to relocate Joeli will be successful,” Schultheis says. When the osprey returns to Illevaara, he will find two artificial nests that should lure him into an area with a sufficient distance to the wind farm.

There are more aspects distinguishing Finnish wind farm developing from building wind farms in Germany. “For instance in Illevaara we have to deal with local reindeers,” Schultheis points out. Experts install GPS-trackers on some of the animals to record the herd’s movement. “This helps us to find out if the wind farm might have an impact on the reindeer’s routes,” Schultheis explains. Furthermore ABO Wind was a sponsor of this year’s Swamp Soccer World Cup in Hyrynsalmi. More than 2000 players from many countries met in the Finish mud to join one of the craziest soccer tournaments in the world. “Of course we joined the Swamp Soccer World Cup as well,” underlines Schultheis, who led the ABO Wind team to an impressive fourth place.

Here you can find the route Joeli took on his way to Cameroon.

Photos and information about the Swamp Soccer World Cup in the Kainuu Region can be found here.